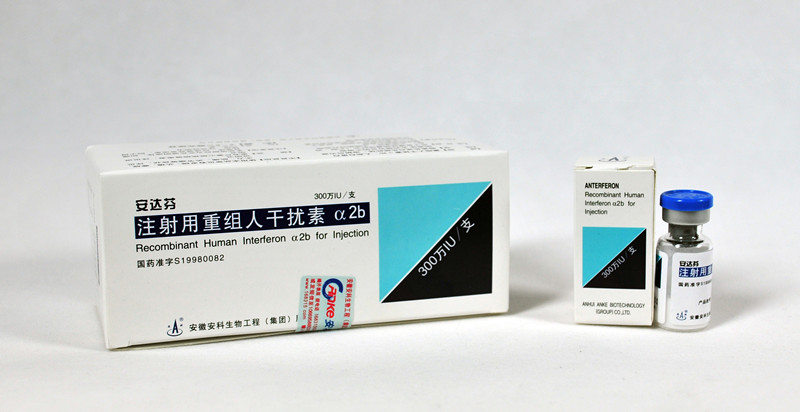 Exerts actions of anti-viral, inhibiting proliferation of tumors cell and increasing immunity such as treatment to hepatitis, leukemia and variety of cancers. Having undergone clinical trails,  has been accepted for its higher efficiency, lower side-effect and less neutralizing antibodies. Our manufacturing plants of  are certified for GMP Standard by SFDA.

Yellowish or white loose powder, when dissolved with water for injection, the reconstituted solution should be clear, transparent and has no insoluble substance visible to naked eyes.

antiviral effect, inhibition of tumor cells proliferation and enhancement of immune function. Combination of interferon to receptors on cell surface can induce syntheses of many kinds of antiviral proteins: these proteins inhibit

replication of virus in cell. Interferon regulates immune function via enhancing activity of macrophages, cytotoxicity of lymphocytes against targets cells, and activity of NK cells.

Toxicology: 1) Acute toxicity test: Interferon® was intravenously and intra-abdomen administered to mice at dose of 1.5*109 IU/kg and 1.5*108 IU/kg respectively, which were 105 or 104 times of human's dosage. No any acute

Anterferon® was intramuscularly administered to rats 5 times a week at does of 1.5*107 IU/kg, 1.5*106 IU/kg and 1.5*105 IU/kg for 6 months, respectively. There was no abnormal reaction on rat's general cases, body weight and behavior. Experiment was repeat on rabbits for 3 months, there was also no pathological change on rabbits' internal organs due to toxicity of Anterferon®.

Cmax of Anterferon® in serum occurred at 3.5~8 hours after intramuscular or subcutaneous injection; the half

of clearance is about 4-12 hours. Kidney is the main organ of clearance. Biliation and metabolism in liver are also important way for elimination of interferon. More than 80% Interferon can be absorbed via intramuscular or subcutaneous injection.

Anterferon® can be administered via intramuscular, subcutaneous or local injection.

3~6*106 IU intramuscular or subcutaneous daily injection for 4 weeks, then 3 times a week for more than 16 weeks.

3~6*106 IU intramuscular or subcutaneous daily injection for 4 weeks, then 3 times a week for more than 16 weeks.

3.      Condylomata acuminata: 1~3*106 IU intramuscular daily injection for 4 weeks. Anterferon® can be also inject daily at dosage of 1*106 IU together with laser or electric therapy.

occurred, administration regimen should be modified or stopped. If any allergic reactions occurred, administration should be terminated mmediately. Leucocytopenia and thrombocytopenia may occur for a few patients and may disappear after cessation of therapy. Anorexia, nausea, diarrhea, vomiting, alopecia, lower or higher blood pressure, and CNS disorders may rarely occur.

1.      Anterferon® is contraindicated in patients with a history of hypersensitivity to interferon alpha 2b or any

component of the injection.

2.      Anterferon® is contraindicated in patients who suffer from serious heart disease.

3.      Anterferon® is contraindicated in patients who suffer from epilepsy function abnormality of liver, kidney or marrow.

4.      Anterferon® is contraindicated in patients who suffer from epilepsy and CNS damage.

5.      Anterferon® is contraindicated in patients with other serious diseases who cannot tolerate Anterferon therapy.

1.      Anterferon® is white loose powder, when dissolved with water for injection, the solution should be clear and transparent. Discard it if there is any solid or opalescence visible to eyes. Don't use it if bottle is spilled or product is expired.

2.      Water for reconstitution should be injected along the inner side of bottle to avoid developing bubbles. The product should be used within one day after dissolved.

Experience of Anterferon therapy in pregnant women is limited, and in such cases the expected benefits and risk should be carefully weighed by experienced doctor.

Experience of Anterferon therapy in pediatric patients is limited, and in such cases the expected benefits and risk should be carefully weighed by experienced doctor.

For old patients who have pre-existing cardiac abnormalities and in advanced stages of canner, electrocardiograms should be taken prior to and during the course of treatment, and the dosage could be modified or the therapy could be

terminated according to doctor's suggestion.

Interferon may change activities of some enzymes, especially inhibit cytochrome P450; thus it can affect the metabolism of some medicine such as cimetidine, diphenlhydantoin, warfarin, hyphyline, apavvin. Interferon may also interact with central nerve medicine.

There was no report about over dosage, high dose of Anterferon® may lead to severe tiredness and weakness.

2 years and 6 months after lyophilized.